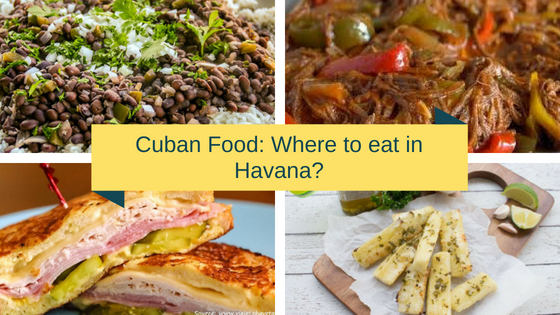 If you are a gastronomy lover, you should not miss the typical Cuban food. In Bed and Breakfast in Cuba we will tell you where to eat in Havana. When you visit this Caribbean island, you should know that there is more than beaches and parties, you could enjoy some incredible dishes.

Cuban food: Typical dishes that you should try

The typical Cuban food is influenced by diverse cultures that mixed in the island. Like the African indigenous, natives Taino, Arabs and Spanish and Portuguese cultures. In Havana, there is even a Chinese influence. They brought varied species to the island, like garlic, cumin, oregano, laurel and more.

The mix of culture is reflexed in the dishes, that are a blend of the cultural influence and flavors. You could find similarities between the Cuban food, and the nearest islands like the Dominican Republic or Puerto Rico.

Being Cuba an island the seafood is very important in their food. Also, the Cubans use meat, fresh fruits, and vegetables in their dishes.

In English, the translation is old clothes. This is the most famous dish in the Cuban food. Its name comes from how it looks, it is not pretty. No one knows exactly the origin of this dish, but some say is influenced by the Spanish heritage. It is also popular in Puerto Rico and Panama.

This dish includes pulled beef, black beans, yellow or white rice, fried plantains and yuca or avocado. And they usually eat it with beer.

It is rice with chicken. This is one of the favorite dishes on the island. You can see some similarities between this dish and the Spanish paella.

Arroz con pollo is not only a Cuban food, this is famous all over Latin America. Almost every country in this continent has a variation of this dish.

There are many variations of this dish included how cooked is the rice or the amount of broth. But the main ingredients are the same: chicken, onion, rice, green beans, broth, onion, garlic, salt, and so on.

You can call it also moro, moros, congri or moro rice, you will see this Cuban dish everywhere you want to eat on the island. It is rice and beans, and it is also common in the rest of the Caribbean, the south of the United States and even Brazil.

The translation in English is Moors and Christians, the first is the black beans and the latter white rice. This is a reference to Cuban first people after the Spanish conquer of the island.

It is a very simple dish in the Cuban gastronomy, but very good. Basically, you cook the black beans in water and then you strain and fry them. Then cook the rice in the broth from the beans, in the same pot. They add species, onion, garlic, and some local ingredients.

Some people serve the rice and beans side by side in the dish, others put the rice and on top the beans. You can try both ways. 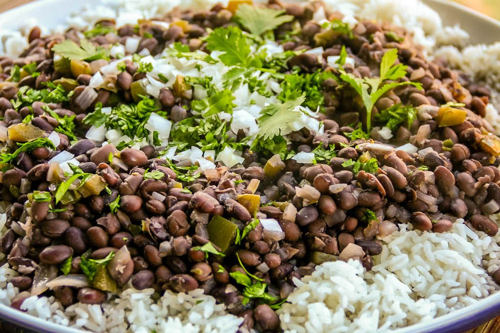 There are many variations of a Cuban sandwich. But the original one does not have mayonnaise, tomato, lettuce, onions, pepper or jalapeños. The real flavor comes from the pork meat.

Nobody is sure about who invented the sandwich or when they started to eat it. Some say it comes from the Sandwich Mixto, that was common in the Cuban restaurant menus in the 30's. This was very popular among the sugar workers.

Before the Cuban revolution, and because of the short distance the locals use to travel to Florida in the US, they usually come and go between the two areas. So, there was so much Cuban influence in Florida and especially in Key West. And they started to eat this sandwich with many variations.

The basic ingredients for the Cuban Sandwich are Cuban bread, pork tenderloin sliced very thin, olive oil or mojo, yellow mustard, queso, pickles and that is all. Some add to this sandwich are salami, ham, mayonnaise, lettuce, and tomato. But these are not the original ones.

The Cuban sandwich is usually very toasted and compressed.

This is another typical dish of the Cuban Cusine, it is so crunchy. It is like Ropa Vieja but does not have tomatoes and in general is simpler. Its main ingredients are onion, garlic, lemon, salt, and meat.

The translation of the name is fried cow, so you can have the idea that the main ingredient is meat, fried and shredded. Served with rice and black beans and sometimes with fried plantain.

This is not a main dish, it is a side dish that uses yuca (cassava), marinade in a mix of olive oil, garlic, and lime. It is a vegan dish.

Yuca is a tuber very used in the Cuban everyday food. To prepare it you put water to heat in a pan. Then add the yuca, once has boiled and the yuca is soft you discard the hot water and add cold. You can do this about three times to soften the yuca. Then you should add salt.

In a frypan, they put olive oil, the very thin garlic, lemon and that is all.

These are a few of the typical Cuban dishes. We can add the lobster, but this is normally an expensive dish. 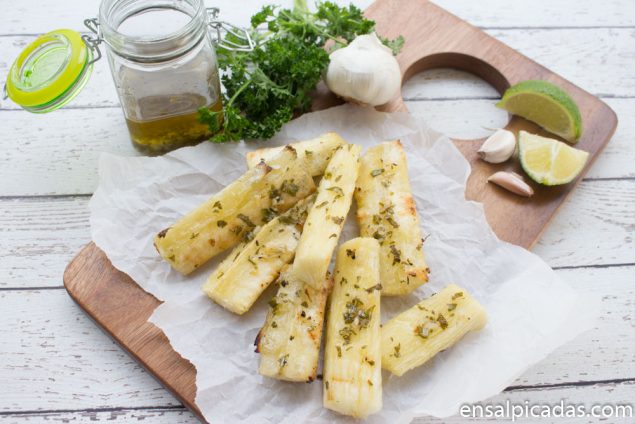 Where to eat in Havana and in the rest of Cuba?

In Cuba, there are three main options for the tourist to eat. You can go to the state restaurants, that are property of the Government; the paladares, that are typical local restaurants and the big hotel's restaurants.

Those are restaurants owned and run by "cuentapropistas", according to the Cuban laws, people who own a small business in Cuba. This is a popular word, that has it origins in a Brazilian soap opera that was on TV on the island in the 90's.

At the beginning the paladares had many restrictions about what they could offer, the help they could hire and the tables they could use. But after 2010 the government did some changes, and it leads to an increase in the number of paladares and a diversification in the food they serve.

You can find several types of paladares, there are the ones that are in family homes, a settled business, run by the family. And there are ones more formal, with different salons, specially modified to be a restaurant.

The next time you travel to Cuba you should eat in paladares. This will offer you a unique experience. You will get to know and interact with the locals, see how they prepare the dishes, enjoy traditional Cuban food and pay so much less than in a regular restaurant.

This kind of restaurants offers Cuban dishes, but also Italian food that is very popular on the island. They also mix various kinds of food, they mix local dishes with influences of Mediterranean and international food. The result is delicious and original meals.

Besides the food, one of the main attractions of the paladares is the environment. Because there are usually at homes, so you will find a very friendly environment, very intimate and relaxed.

The paladares are not only an option to eat in Havana, you can find them in other tourist towns like Trinidad or Holguin.

Some famous paladares are La Cocina de Liliam, Los Mercaderes, Doña Eutimia, La Guarida, La Fontana or Gringo. These are places you should visit in Habana. 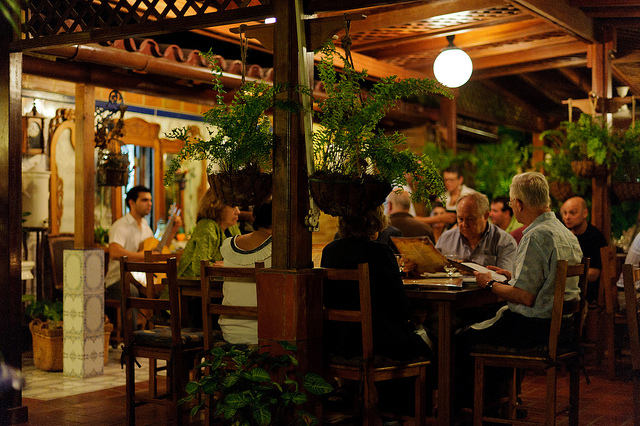 To eat well in Cuba you should eat what the locals eat. So, when you plan your next trip to the island you can stay in Casas particulares in Old Havana, and share with the Cubans. Many of these houses offer you food, if they do not, the will tell you where to eat the best dishes.

The Cuban gastronomy is a fusion as we said before. And you will eat the best dishes in the houses of the locals.

After eating the traditional Cuban food do not forget the Cuban desserts. There are flan Cubano, casco de guayaba, rum cake, Arroz con leche (rice with milk), tres leches, and so on. All of them are delicious, you should try them.

Besides the traditional Cuban food and desserts, they have some drinks that are famous all over the world. For example, the rum, Habana Club is the most famous brand. With the rum, they made the famous mojito and the Cuba Libre or Cubata.

You can try the guarapo, is a drink made of sugar cane. The coffee in Cuba is also famous, so give it a try. They also have their own soft drinks, with different flavors. There are also local beers that you should try.

Contact us to book your accommodation in Cuba. Visit the island and try the Cuban food, now that you know where to eat in Havana you do not have any excuses. 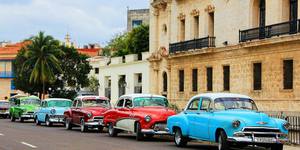 Important information to travel to Cuba 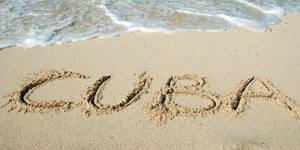 Is Cuba safe for travelers? 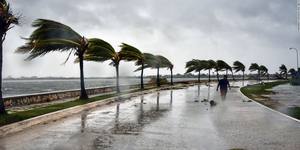 What happens to Cuba after the hurricane Irma?