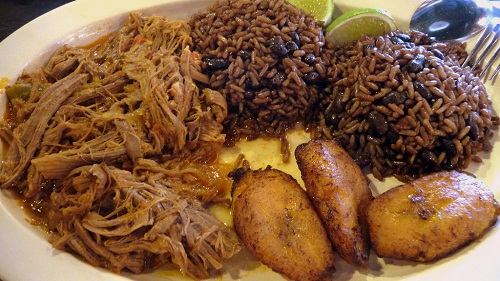 Are you a gastronomy lover? In Bed and Breakfast in Cuba we’ll tell you which are the typical Cuban dishes you must try. Tropical food, mixed with all the ingredients that arrived from Europe, Asia and Africa have made of the island a culinary destination. This mixture of flavors is another of the charms of the Caribbean island!

Cuba gastronomy is a mixture of cultures and flavors. Before the Spaniards arrived to the island, the Indians had corn, yucca, sweet potatoes, beans and much more. Among the authentic fruits of the island are pineapple, tamarind, star apple, guava, cashews, etc.

They were also fishermen and hunters. Cuban Indians ate plenty of seafood, turtles, jutía and crocodiles.

The influence of the Spanish began in 1492, when the colonist arrived to the island. They brought coffee, bananas, oranges, rice, pigs, horses, rabbits, among others. Soon, pork became a favorite of settlers and natives and began to form part of a variety of dishes.

From Africa they got bananas, plantains, guinea fowl, malanga and more. These products were acclimatized to produce them on the Caribbean Island.

With their influence, Cuban cuisine evolved for centuries to become what it is today. Rice became popular because of Catalan influx, but because of Africans, it’s used as a complement in almost every dish.

Fried food is also a Spanish heritage. Cubans learnd it from Spainard who came from Andalusia.

Fufú and tostones, two classics of Cuban food, are actually from Africa.

The Spanish influence didn’t end with the colonial period. At the 20th century, the immigrants introduced even more culinary traditions. What we found today is a very natural and flavored cuisine.

In this post we’ll show you some of the traditional Cuban food and best cuban dishes you have to try on your trip to the island. If you already started planning your next vacation, contact us to find the best accommodation.

Typical Cuban dishes you must try

If you like food, you need to try the real Cuban food recipes. There are an extensive number of dishes you can find in restaurants and accommodations. Take a look at this list we’ve prepare for you. 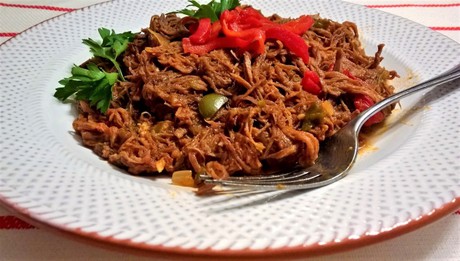 This is the national dish of Cuba. Is made of crushed beef tomato paste, red peppers, onions, and garlic. As almost every dish in Cuba, rice is part of the recipe. You can order white rice, but Cubans prefer to eat it flavored. That’s why is common to get it with brown rice or congrí.

Boiled potatoes and fried plantains can also be a complement of the ropa vieja recipe.

Congis also know by (moros y cristianos) is a very easy dish to prepare. It’s a mixture of rice and beans. They start to cook the beans and when they are almost ready it is added on the raw rice. Let it dry on low heat. You should get the rice grains loose.

The congris is served with roast pork and plantains. You can find it all over the island, but prepared in different ways. Is also possible to find it as a side dish in many other Cuban meals.

Ajiaco is a typical soup in different regions of Hispanic America. Colombia, Peru, and Chile, in addition to Cuba, have their own version.

Cuban recipe is prepared based on beef and pork. Corn, yucca, plantains, green bananas, onion, chili pepper, and more are added to the recipe.

Lobster is a very popular food in Cuba among tourists. It is served in restaurants but also in Casas Particulares. It’s cheaper than other countries, that’s why visitors always try to get one. Is usually served with tostones, (fried plantains), vegetables and congrí.

If you are in Casa Particular in Playa Larga, La Habana or any other destination, ask the owner of the accommodation to prepare some lobster.

Four of the easiest ingredients to find in Cuba mixed at the same dish. Rice, eggs, beans, and plantains. It is a simple but very popular dish on the island. Any Casa Particular can prepare this to you. This is the most popular traditional foods in Cuba.

Mojo is a sauce made with oil, onions, and garlic. This mixture is poured on top of boiled yucca. Then, some lime juice is also poured on it. It’s really easy to prepare and very popular in parties and holidays meals.

This is another one of the most popular dishes in Cuba. It’s made with beef and pork, garlic, tomatoes, olives, capers, cumin, etc. And served with white rice and plantains.

The Cuban tamales are similar to the Mexican tamales, but in the island, the meat does get mixed with the dough. In the Mexicans, the meat is just filling.

The tamales recipe is not the same in every region, it has some variations, the basics is that is made with corn and pork meat.

In the Cuban houses, people use to get together with family and friends to make tamales, because they need a lot of work. So, for the locals, it is best to share the labor of this typical dish. You should try tamales in your accommodation or in the paladares.

Rice with chicken is a typical dish in all over Latin America, is the local version of the Spanish paella. The Cuban one has its own touc, with different spices. The locals love to eat this, it is a comfort food.

It tastes and smells so good that you would not resist the need to try this traditional Cuban dish. The preparation may vary, especially the consistency of the rice, the amount of broth.

It is a whole piglet roasted, the pig is crossed by a puja and cooked over firewood or carbon. This dish is very traditional on the island, it is the main course in every big Cuban celebration, like birthdays, new year, father and mother´s day, and so on.

They love the Lechon Asado homemade, you do not want to miss this in your next visit to the island.

Some will say this is the national Cuban dish. Not just because of its flavor, but for the ritual that surrounds the preparation. Although they did not create this dish, its history goes way back to the Greeks, then Spain, and this is how it arrives in America. 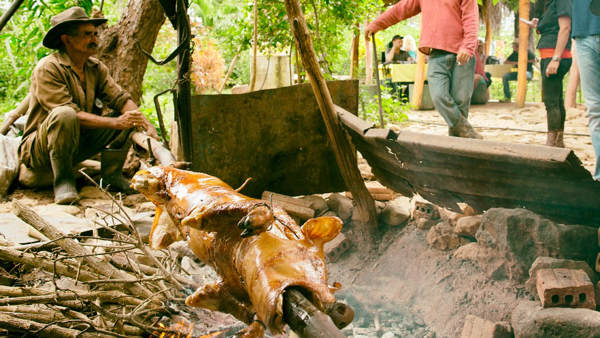 Medianoche is translated as midnight; this name comes because the sandwich was usually served in the nightclubs. It is also known as Cuban pressed sandwich this is a typical dish in every coffee shop in Cuba since the 19 Century. It is a whole meal because it usually includes bread, ham, pork, cheese, pickles, and mustard.

In some countries people add eggs to the sandwich, it is mixed. In Miami, USA, it is a very popular dish as well.

This means fried cow, it is very traditional in Cuba, and so delicious. It is crunchy, basically, it is beef marinated with salt, lime, and garlic, and then just cooked in a frypan until crispy.

It is served with rice and black beans, that is why it is compared to the Ropa Vieja, but the vaca frita does not have tomatoes. It is simpler.

This is Havanan eggs, they are eggs cooked over a spicy sofrito (tomatoes, garlic, peppers, and onions), with cheese as a topping. It is a traditional meal for breakfast.

These croquettes are very traditional in Cuba. There are fry balls of dough with cheese and filled with jam.

The Cuban food has so many dishes that we maybe have left outside this list some of them, that is why we will like to mention them: fried plantain, picadillo, tostones, chicharrones, frita, pulmeta, shrimps in coconut sauce… 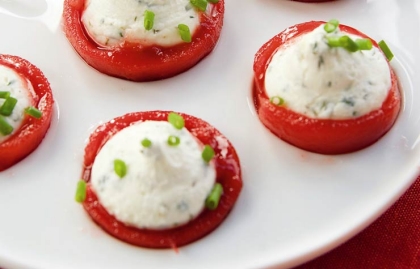 No meal is complete without desserts and Cuba has some that are worth trying. Local ingredients dominate the scene. Again, rice and yucca can be found in some sweet recipes.

Some other Cuban desserts are Casco de Guayava (Guava). The fruit is boiled with sugar and lime juice. The guava is also found in other desserts recipes.

Where to eat typical Cuban food?

Private Restaurants and Casas Particulares are the best options to try Cuban food. The difference between them is the price. Cuban families are given to prepare typical food for their diners. So do not hesitate to ask them to prepare some food from the region.

A breakfast at Casas Particulares consists of different types of fruits of the island, coffee and milk. Eggs, Cuban bread, ham, cheese, and butter. For a typical lunch and dinner in Cuba, you can expect some of the dishes that we mentioned in this post. Lots of rice, beef, chicken or pork, vegetables and beans.

Both Cubans and tourists like seafood. So it is not surprising that they also offer you some dishes of this type in your lodging and in the Cuban restaurants.

But you won’t be always at home. So, you need to find some good restaurants where to eat. The owners of the accommodation can show you the best places, according to the town you are visiting.

In La Havana, there are some excellent choices to eat. Some of the best restaurants include Café de los artistas, Porto Habana, Habana 61, San Cristóbal Paladar, La Guarida, Don Ávila, Doña Eutimia y El Litoral. When you are walking around the city, stop at one of them to enjoy Cuban food.

There are others options where you can eat cheap in Cuba. One of these alternatives are the Paladares. These are very small restaurants, some are just a window facing the street.

But, the menu is usually limited and they may offer very few dishes. The quality of the food is also less good than that of the restaurants, but you can find some very good ones. Ask the Cubans which are the best options in the city where you are.

A tip to find them: walk off the tourist's route. In the tourist parts you will find restaurants, but few paladares. Ask the locals, they will be your best guide to find them.

The other option is the food markets. In them, they meet several small premises dedicated to the sale of food.

They have in common with the paladares the limitations on the menu and the quality they offer. Even so, they are a great option to try the typical Cuban food. Again, you will need to find these places, so practice your Spanish to ask the Cubans for directions.

Cuba has aroused great interest as a culinary destination. Some visitors will be surprised to get to know the mix of flavors and bump into recipes they did not expect to find on the Caribbean island.

This is another sign of the rich culinary culture that has developed on the island over the years. Although it can not be forgotten that for a long time they were limited by the political situation of the country. For example, private restaurants were not allowed until Raúl Castro became President. At the same time, it became easier for Cubans to find some ingredients. But still, they have their limitations.

Even so, having access to the rich Cuban gastronomy is a great gift for any tourist and an opportunity that you can not miss. Food is not the only typical product you should pursuit at the island. Don’t forget about tobacco route.

We’ll be waiting for your opinion about these typical Cuban dishes you must try. Have you eaten some of them? Is there any other you recommend? Leave us a comment.